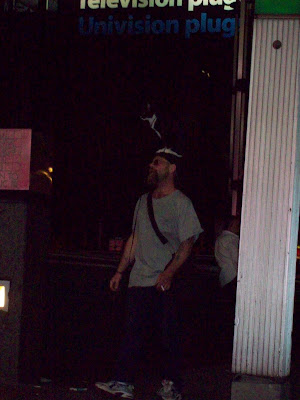 I saw this guy walk by my cab a few weeks ago with no shirt on, and this cat on his head at around 2am on a Friday night. He was screaming to people that he had a cat on his head .....that moment was part of the grassroots for this blog because I didn't have a camera on me that night and said to myself "Damn, never see that again!!".....However , three weeks later I saw him as I passed by riding down 7th ave (camera ready this time) and went around the block not to miss this curious "Cat on the Head" fairytale character of the New York night. He was again yelling to people saying "THAT'S RIGHT !!! CAT ON THE HEAD !!" I thought for a moment that had he worn the Cat in the Hat kinda Hat, we wouldn't even see that he had one perched on his head !!! So when you're in the city, keep an eye out for,.... THE CATMAN !!!! Bee bop boo bodop beep.
Posted by King of New York Hacks at 12:49 AM 3 comments:

So this is the beginning of yet another NYC Taxi blog which hopefully I will update every week at least once with a photo of what I think is interesting or funny. Hopefully you will too, and spread the word as I sail the streets of New York through the sea of people and the hopes and dreams of the citizens and the customers of my city , which is why I am the King of New York, Hacks that is.
Posted by King of New York Hacks at 12:25 AM 2 comments: